Tips for producing the best apples

The market for apples

The U.S. grows 4.3 to 4.5 million tons of apples per year, generating about $23B in downstream value. The top ten apple producing states are Washington, New York, Michigan, Pennsylvania, California, Virginia, North Carolina, Oregon, Ohio and Idaho. 30% of the crop is processed for juice, etc. About 33% of the U.S. apple crop is exported. The U. S. imports apples just before harvest or when stored supplies run out in late Summer. Harvest is typically between July and November, some cultivars later, some earlier. Growers often plant several cultivars with different harvest seasons to extend their selling season.

China is the worlds top producer of apples at about 45 million tons, the U. S. is second. The biggest importers of apples are Germany, Russia, United Kingdom and Egypt (Note: 2022 Russian imports are projected to drop 40%)

Frost conditions during bud break and bloom can devastate an apple crop. To protect the buds some growers install overhead microsprinklers. Spray from the sprinklers freezes on the trees, thermodynamically releasing heat as the water freezes. Overhead sprinklers can also be used to prevent blister from sunburn during periods of extreme heat.

A variety of pests can impact apples. The primary pests generally deposit eggs on or in the maturing fruit, or sometimes on the late-stage flower. Larvae then feed on the fruit to maturity. Pesticides can aid in insect control, but they should be used sparingly and not at all when bees are pollinating. Applying pesticide routinely when a pest may not be present is expensive and time-consuming. Some growers keep pheromone traps in their orchards which they check daily for signs of growing populations, spraying only when necessary and using pesticides targeted to the pest being controlled where possible.

The most common diseases of apple orchards are apple scab, fire blight, powdery mildew and the family of juniper rusts. Generally these diseases attack the tree, not specifically the fruit. Many apple cultivars are the result of breeding programs that promoted resistance to targeted diseases. Resistance is not the same as immunity, in some circumstances treatment is necessary.

Finally, apple orchards are susceptible to a variety of fungal infections. Some fungal infections can be treated with appropriate pruning and removal of infected wood, followed by fungicide treatment. In other cases the tree is so damaged that it must be replaced.

Drought conditions over much of the West in recent years has stressed apple orchards. Rootstocks can have a considerable influence on trees ability to handle water stress, generally larger rootstocks will fair better in drought. Growers are often limited during drought in the amounts of water they can use, so it is important for growers to carefully monitor conditions in the roots at various soil levels to ensure that water at appropriate times in appropriate amounts. 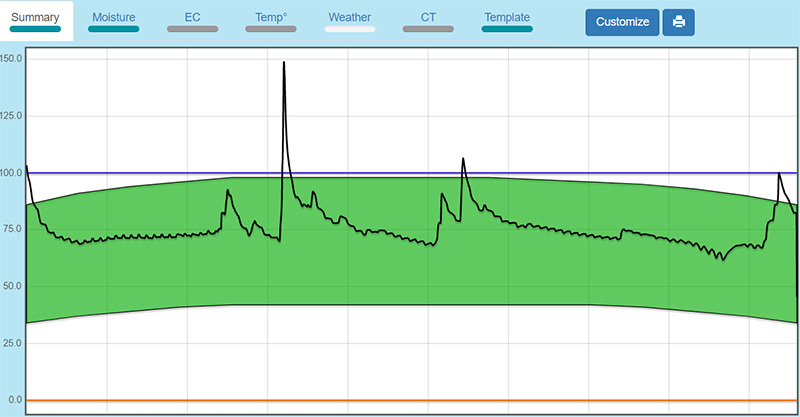 With a Crophesy monthly app subscription, you receive a free simple, three-, six- or twelve sensor, wireless, soil moisture probe.  Pick the sensor depth based on your apple type and growing methods.

Then you can instantly monitor soil and crop health for all of your apples. And if you want to test the soil in other areas, you can quickly and easily move the moisture probe, which is battery-powered and provides season-long insight.

While you can look at the visual analysis of leaves, spending hours in your field, Crophesy enables you to open your app from anywhere and show you what kind of nourishment is available in your soil at your apple trees root depth. With this data, you can determine when the active root zone needs vital nutrients.

In addition to nutrient data, the Crophesy app can show you:

And it tells you all this without you having to step foot in your apple orchard.