The Market for Wine Grapes

The International Organization of Vine and Wine’s 2020 report showed that wine consumption diminished by 3% from the prior year. A substantial decline in consumption of 17.4% in China (PRC) may have contributed, but overall the decline was probably largely due to the virtual shutdown of the HORECA (Hotel, Restaurant, Catering) sales channel worldwide due to the Pandemic.

European nations have been actively regulating wine grape production since 1978 in an effort to avoid over-supply and sustain prices. Some nations have purchased substantial portions of their country’s output to maintain prices. In 2008, EU Member States agreed to a plan calling for (among other things) a three-year program for the voluntary removal (grubbing up) of up to 175,000 hectares (430,000 acres) of grapes.

In the U.S., California grape production and prices were down 13% compared to 2019. While wildfire tainted some grapes that were then destroyed, most of the decline was attributed to a cutback in production following overproduction in 2018 and 2019. Napa Valley grapes brought the highest average prices at $,577.62 per ton (down 20% from 2019).

Wine grape vines can be very fragile in some parts of the growing season, and they are usually susceptible to frost damage in any season. In April of 2021, a three-day frost in the Burgundy region of France wiped out nearly the entire crop, as it happened during the delicate budding season. Over €11B in crop losses occurred. In California, smoke from massive multi-day wildfires tainted many grapes which then had to be destroyed. Other threats have been around a long time, notably Phylloxera, a type of aphid which feeds on roots and leaves, opening the vine up for secondary fungal infections. Phylloxera has devastated entire regions since the late 19th century. There is no cure for Phylloxera, and no chemical control. The most effective responses to date involve hybridization to more resistant species and grafting of varietal scions to hardier North American rootstock.

Drought has become an issue in California and many other parts of the world. When rainfall is limited, growers use more irrigation from groundwater sources, which contain salts. This can result in an increase in soil salinity. When the soil has a high salt content, it can leech water from plants to preserve osmotic balance. There are methods for controlling salinity around the roots, but to do that the grower needs accurate information on the salinity of the soil at every level where the roots are growing. In the field, salinity is often assessed by measuring Electrical Conductivity (EC), a relative proxy for salinity. If the grower knows EC at each level of the plant roots, the grower can estimate the trend in salinity up or down and act accordingly.

On the other end, vigorous rain events such as the ARkstorms visiting the U.S. West Coast can invite fungi and other pests that thrive in saturated soil. Some grapes with natural or hybrid thin skins can swell up and burst with too much rain.

Wine grapes are somewhat unique among commercial crops. Excepting some bulk wines, they are generally not treated as a commodity. Prices can vary widely due to quality for wine-making. It is well-known that Regulated Deficit Irrigation of the maturing grapes can lower yields while producing substantive increases in quality and better profit. Producing better results reliably is often a delicate balancing act on the part of the Wine Grape Grower, who has to manage the timing and amount of water events carefully.

The AquaSpy intelligent connected crop monitoring platform manages inputs and optimizes yields by listening to wine grape vines and interpreting their needs for water and nutrients throughout their growing stages. AquaSpy systems measure EC at each level where there is a sensor, giving the grower an actionable estimation of salinity trends. Proven, reliable, accurate, affordable and easy to deploy and use, AquaSpy can help any grower better manage water, fertilizer and labor hours, increasing efficiency and profitability in vineyards. 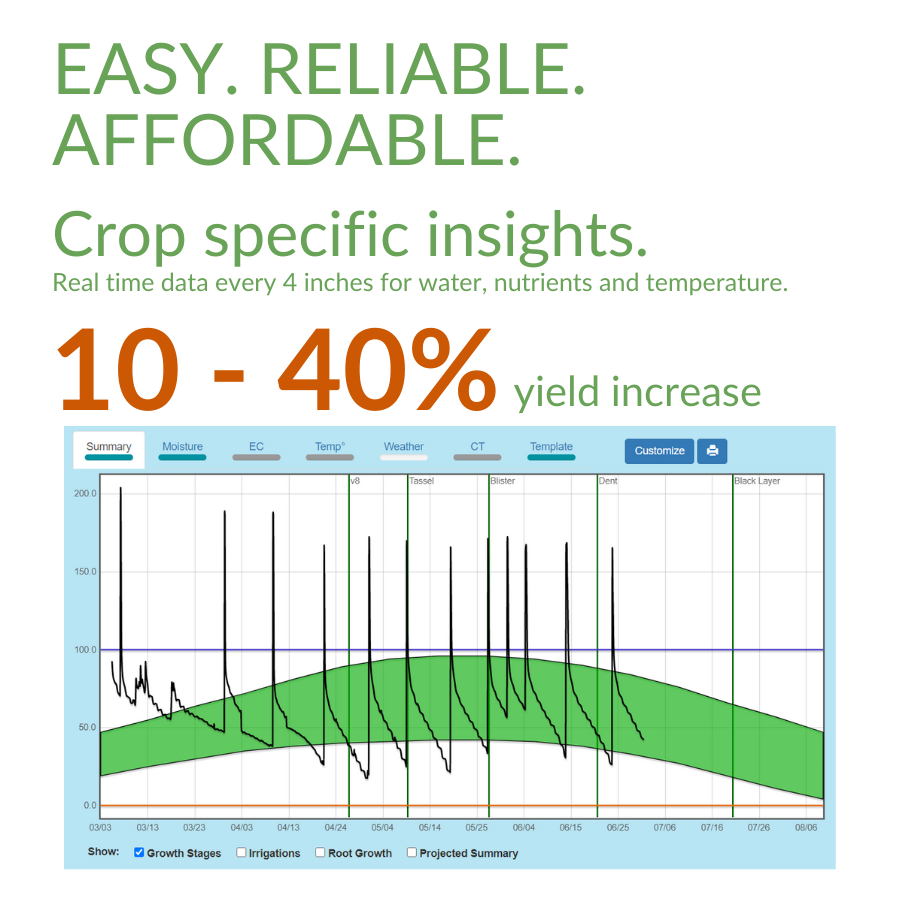